Home » I Won A House At The RCBC Dream Buys Auction Of Foreclosed Properties!

Well, you could look at it that way. I won my bid on a foreclosed property where the minimum bid price was just about equal to the market value of the land alone, thus the house on the land was practically free! 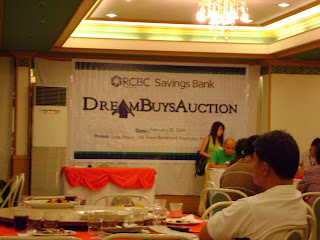 The RCBC Dream Buys Auction was held at the Jade Palace, located at 106 Shaw Blvd, Kapitolyo Pasig City, Philippines. Since it was a Saturday, getting there was a breeze. Jade Palace is hard to miss. I arrived early and parking was hassle-free as valet parking was available. When I arrived at the auction area, I was greeted by the very pleasant staff from RCBC and was shown to the registration area. As advised by my broker (who handles the area of the property I was interested in), however, I waited for the last minute to register. Just to give a background, a couple of days prior to the auction, I inspected a number of properties in the same vicinity with my broker, and when she showed me a property that looked very promising, she mentioned that the previous owner’s sibling was already going to bid on it. I told her that if thats the case, then I don’t intend to bid on that property anymore as I believed that the previous owner’s family should get first crack to get this property. I felt it was the right thing to do. However, the night before the auction, I texted my broker and asked if I can attend the auction anyway just in case the previous owner’s sibling would change their mind or lose interest on the property. Of course she said I could attend and so I did. I just did not register immediately as I was still waiting for the previous owner’s sibling to show up and bid. Some of you might think I was hoping they would not show up. Nope, that never crossed my mind. However, I was not going to let such a great opportunity pass if ever they did lose interest in the said property.
Since I arrived at the auction early, I just let time pass by observing what was unfolding at the auction venue. I noted that this public auction was jampacked as all the tables were full and a lot of bidders came with their families. I also met a couple who are Think Rich Pinoy (TRP) franchisees. A fellow TRP Club Marikina member also attended the event to observe and be familiar with auction proceedings. It’s always nice to meet fellow real estate investors and exchange notes with each other during auctions. This auction appeared to be handled by RCBC all by themselves, unlike other auctions which are handled by a third party. Kudos to RCBC for a very well-organized auction!
When registration was almost up, my broker informed me that the sibling of the previous owner of the property I was interested in won’t be coming to the auction. I can only assume that they were no longer interested. Because of this, I proceeded to register and got my paddle. 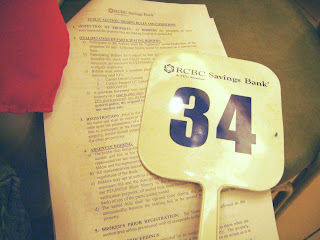 My lucky paddle
Before the auction started, all auction participants were served a very heavy breakfast which consisted of a set menu of Chinese food like yang chow fried rice, sweet and sour pork, beef with vegetables, lumpiang shanghai, pecking duck or fried chicken (I wasn’t really sure as I didn’t taste it because I was on a diet), etc. I just have to mention that the food was fantastic! This is often the case when attending public auctions. So even if you don’t win in the auction, at least you were able to eat good food! Hehe.

During the auction proper, the pace was very relaxed and very friendly to first time bidders. The auctioneer handled the auction quite well without rushing the bidders, giving them a lot of time to outbid each other before banging his gavel to announce the winning bid. The atmosphere was very festive as people applauded after each time a property was sold to the winning bidder. I noticed there were some foreclosed properties that had no bidders, but there were also a lot of properties that had lots of bidders which resulted in very high winning bids, sometimes reaching more than Php500K higher than the minimum bid price. For a few lucky bidders, they were able to acquire the properties they were interested in at the minimum bid price because there were no other bidders. I was one of the lucky few who won their bids at the minimum bid price.

Those who won their bids then immediately proceeded to the processing area where the documentation and payment of the show money was done along with the release of other documents. This was done very efficiently and the winning bidders just had to move from one table to the next. In my case, before I knew it, I was done. Of course, instructions were given to me on the next steps that need to be done like paying the 20% downpayment, submission of other requirements, etc. After that, me and my fellow TRP Club member left the auction.

In retrospect, this was the 7th public auction of foreclosed properties I have attended, the 4th which I actually made bids, and this was the 2nd where I won my bids. I noticed that my nervousness was already gone and attending public auctions have somehow become routine to me. This is why I advice those who are new to foreclosure investing to start attending public auctions even if you have no intention to bid yet, provided you’d come with someone who is actually bidding (because you won’t be allowed inside without him/her). I assure you that your time would be well-spent. When the time comes for you to make your bid, it would be very easy. 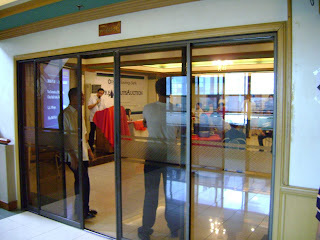 This is the view from outside of the auction venue. Make sure you come with someone who is bidding so you can see more than this.
How about you, have you attended any public auctions of foreclosed properties? If yes, that’s great! Keep it up! If no, why not? What’s holding you back? Leave a comment below and let’s talk about it.

People encounter problems and make mistakes when buying foreclosed properties, and I want to help people avoid those problems/mistakes. I encountered a lot of those, which is why I started this blog in 2008 to serve as a guide where I share lessons learned, and how to overcome challenges with investing foreclosed properties in the Philippines … [Read more]
Subscribe
34 Comments
Newest
Oldest Most Voted
Inline Feedbacks
View all comments